Among Women 176: What We Love About Pope Francis

Welcome to a  special edition “What We Love About Pope Francis” featuring comments from Among Women listeners and conversation with our special guest, Sr. Anne Joan Flanagan FSP, author of a new e-book about Pope Francis!

This week we honor the first anniversary of the election of Pope Francis. In this episode your host asks the Among Women listenership: What do you love about Pope Francis? And, what have you learned from him?

This show features the many and varied answers coming from the friends and listeners of Among Women. It also features a conversation with Sr Anne Joan Flanagan of the Daughters of St Paul, AKA the blogger at Nun Blog. Sr Anne has just released a new e-book 5 Keys to Understanding Pope Francis: What He Says and What He Does from Pauline Books and Media. Together we have a lively discussion about some of the big themes emerging in the Holy Father’s pontificate. 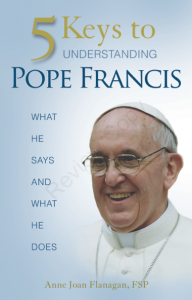 Listen now by clicking the play button above!

Links for this episode:

Lumen Fidei – The Light of Faith

Evangelii Gaudium – The Joy of the Gospel

Other shows of related interest: